Mielle Harvey is a sensitive jeweler with interests in the birds and the bees, with living and dying, and all the fragile and meaningful aspects of life. Her show at Maurer Zilioli Contemporary Arts consists of both drawings and jewelry.

Susan Cummins: Can you describe how you became a jeweler?

Mielle Harvey: I became a jeweler quite by chance. As an undergraduate student at Rhode Island School of Design (RISD), I had to declare a major, and because I had many interests, it was difficult to decide. At the time, I was drawn to the fine arts, but thought I should study industrial design or architecture. While touring the school, I became intrigued by the jewelry department, where the opportunity to work with metals and fire seemed exciting. I only planned to study jewelry for a semester or two while I figured out what I really wanted to do, but one thing led to another and the rest is history...

Drawing is also an integral part of my practice and provides another means of working with the issues I address in my work. But the skills I learned through studying jewelry allow me to express ideas in an intimate and detail-oriented way that is very special to the field.

Making purely decorative objects has never really interested me, so I immediately gravitated to the art jewelry field, where I could use the idea of adornment as a starting point for expressing my thoughts about life, death, and regrowth.

What was your educational background?

Mielle Harvey: I was raised by artistic parents, so my background in the arts started early. During my teen years, I was fortunate to attend the Cambridge School of Weston, which further nurtured my interest in the arts. Following this, I went to RISD, where I studied for four years and received my BFA. Eager to continue my development as an artist, I enrolled at the Academy of Fine Arts, Munich, where I studied under Professor Otto Künzli for six years.

Since you attended both the German Academy and RISD, can you reflect on the different experiences?

Mielle Harvey: As an undergraduate at RISD, I was building my technical skills and starting to develop my own ideas as an artist. I worked long hours in the studio, and the experience helped me learn to focus and self-direct, as well as how to critique work and receive constructive criticism. I also began to understand how to make the artistic decisions that help to communicate an idea. My time at RISD was not just about making objects, but also about understanding how they can convey meaning.

Studying at the Academy gave me the opportunity to delve deeper into my ideas and explore what I wanted to say. The rich environment of intellectual exchange was fundamental in helping me develop new means for expression. Initially, the lack of formal structure was disconcerting, as there were no classes or assignments. Everything was self-motivated. Such freedom was daunting at first, but became invaluable to me. Once a week, we had class meetings, in a round-table format, where students had the opportunity to show work and receive feedback from our peers and professor. These critiques were in depth and could last for hours. The exacting and highly analytical nature of the discussions came as a shock at first. We discussed every aspect of an object or body of work, down to the most minute details and how this would affect the perception of a piece. Despite this, there was a liberating openness toward the definition of jewelry. We were encouraged to experiment and redefine the boundaries of what jewelry could be. It was gratifying to study in a country where the arts are so respected. 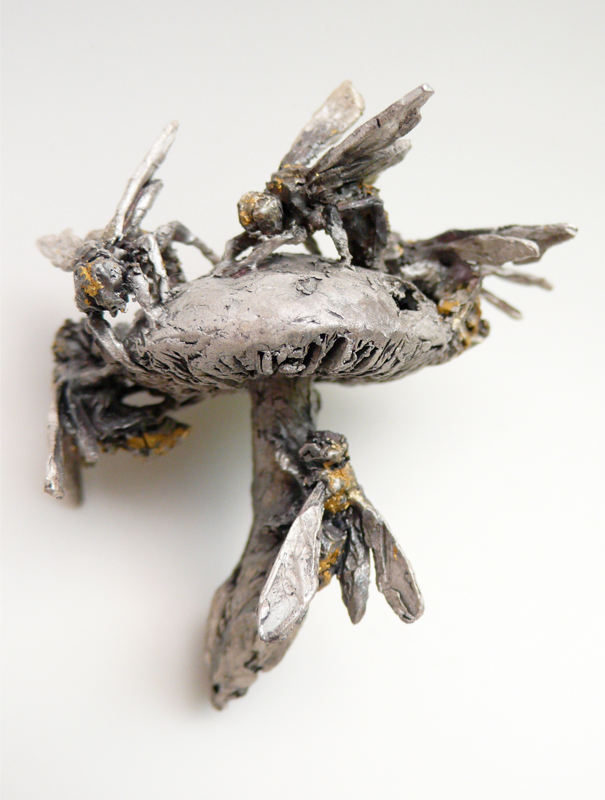 Your work often includes rough representations of birds and insects. What do you find so fascinating about them?

Mielle Harvey: While birds and insects often feature in my work, I actually use them as symbols for issues I want to raise. In reality, they are a starting point from which I create objects that challenge expectation and provoke emotion.

My work does not use actual insects or birds, because I find the process of sculpting them allows me to emphasize those aspects that support the ideas I want to convey. Through these sculptures, I seek to address issues inherent to adornment itself. The process of sculpting these pieces is crucial for me, as it allows me to transform the subject into a medium that expresses emotional ideas through form, texture, material, negative space, and weight.

I started working with birds as a subject when I was a student in Munich. I was thinking about jewelry as a symbol of power, and how power is often gained or expressed through violence and destruction. At this time I was spending many hours in art museums in Europe, making sketches of paintings. My first “dead bird” pieces evolved from this, inspired by my studies of still lives and hunting scenes. Paintings are still a prominent reference for my work.

Through working with birds as a topic, I aim to confront the viewer with ideas about sentimentality, loss, and death. Playing with the idea of vanitas, I seek to generate empathy and an appreciation for the fleeting quality and preciousness of life.

In relation to insects, I am personally fascinated by them and the critical role they play in sustaining life as we know it. However, my work based on insects began as a means of questioning ideas about beauty in adornment. Because I’m aware that many people find insects frightening and repulsive, I wanted to utilize this reaction as a way of challenging the viewers’ expectations about what is beautiful. By using precious materials and depicting insects as valuable objects to be worn, I strive to elevate their status and make the viewer aware of their intrinsic beauty and value. I purposely do not prettify them. Instead, I emphasize their mysterious qualities, or even those aspects that we can find most troubling. For me, beauty in art is often intertwined with ugliness.

Mielle Harvey: The birds I depict are often inspired by paintings displaying trophies of the hunt. Each species has different associations, so I reference birds that have a history of being hunted, from swans to songbirds. Specifically depicting dead birds, and how they hang so limply, is my way of creating powerful feelings of empathy and an awareness of life’s fragility. Which insects interest you the most?

Mielle Harvey: I am fascinated by bees and wasps, and also the structures they create. In my artwork, which includes drawings, paintings, and jewelry, I often reference paper wasp nests and honeycombs. For me, working with hexagonal structures is a meditative process that allows me to experiment with materials and ideas for manipulating space.

With the growing awareness of colony collapse disorder, the public is becoming increasingly informed about the importance of insects in agriculture and everyday life. But I also see these issues as a metaphor for other human-induced problems caused by the lack of understanding of the symbiotic relationship between all living things.

To hopefully raise even greater awareness of such issues through jewelry as communicative medium, I have been working on a dedicated collection of insect-related pieces called The Hexapoda Collection. (Hexapoda is Greek for “six legs.”)

You render these creatures in wax and then cast them in silver and give them a very crude finish. What are you trying to accomplish with this sort of repulsive look?

Mielle Harvey: While it is true that some of my pieces play with the idea of repulsion, the rough finish is not specifically intended to be repulsive in itself. I find that a rough finish, which results from the way I choose to work with wax, gives the work a certain degree of ambiguity. This, I hope, will allow a viewer to interpret it with less constraint.

Throughout my work, I try to create objects that embody a simultaneous sense of growth and decay. My sculpting method, which involves building up and taking away material, helps to capture this transient state. I love the way that wax holds the marks of the working process, which for me captures that sense of transformation. A smooth and polished surface would potentially make the pieces seem static and less organic, which would impart a very different meaning to the work.

In your recent work, you have moved away from birds and insects and have begun drawing on both paper and silver. How do you see them relating? What are the intrinsic problems with drawing a landscape on a pendant?

Mielle Harvey: Drawing has always been an important but less public part of my practice. For me, these new pieces are an exciting amalgamation of my drawing and jewelry work. I call these pieces “silver scenes.”

Historically, people would immortalize loved ones through small portraits, often wearing them close to their heart. In this series, instead of capturing images of people, I capture portraits of nature. These pieces can then be worn as pendants, or displayed on the wall as drawings.

Instead of drawing with a pencil, I use a steel dry-point needle to scribe directly into the metal. While this process has some limitations over drawing on paper, it also offers new possibilities. For example, I can use patina and resists, and also alter the surface to create textures with different reflective qualities. All of this would be difficult to do on paper. What do you hope the viewer will bring to your jewelry? Or will see in it?

Mielle Harvey: I see my work as a sort of visual elegy and a reminder not to take life for granted. I hope that each piece contains a bit of mystery and allows for new discoveries over time. By seeing a bit of oneself in a jewelry piece, each viewer brings an added meaning to the work. I hope that by addressing complicated issues like fragility and mortality, I can embolden the viewer or wearer of a piece to treasure the loveliness and fleeting quality of life.

Do you have a favorite jeweler or someone who acted as a mentor to you?

Is there an artist who you think is highly overrated? If so, why?

Mielle Harvey: Yes, of course ... because success can be achieved for many reasons other than the quality of one’s work.

Can you recommend a book or film that has had a major impact on you?

Mielle Harvey: Many films have made a strong impression on me, but if I had to choose, I would say that the films of the late Russian director Andrei Tarkovsky have been the most impactful for me. All his films, but particularly The Mirror, The Sacrifice, and Stalker, really capture the kinds of emotion, attention to detail, and awe that I also seek to convey.

One book, which I recommend, and that pertains to the issues I also seek to address, is Annie Dillard’s Pilgrim at Tinker Creek.